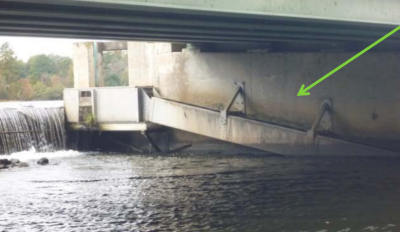 The spring migration of shad, herring and eel was once a harbinger of the season on rivers and creeks throughout the Inland Bays, but spawning runs have drastically declined. The construction of dams on our waterways to supply power to mills of our area’s past, present a unique issue today.

Dams represent an obstruction to spawning runs of key species in Indian River. There are 8 such dams in the Inland Bays drainage system.

A glass eel captured at the base of a local dam.

American eels spend their lives in both the freshwater streams and ponds and in the brackish waters of our bays. Eels exit the bays in the fall and travel to the Sargasso Sea, an area roughly between Bermuda and the Caribbean, where they breed and subsequently die. The fertilized eggs drift with the ocean currents back toward the Atlantic Coast developing along the way.

By the time they reach the Inland Bays they are about 2 inches long and transparent. They are termed ‘glass eels’ for their see-through appearance. Glass eels will make their way up the rivers of the Inland Bays in the late winter and early spring in search of freshwater habitats to grow in.
Unfortunately, dams cut their incredible journey short, and block access to miles of previously available habitat. It is partially for this reason that the American eel stock is considered depleted by management agencies.
To help bolster eel populations the Center constructed an ‘eelway’ at an important dam in the watershed. This eelway allows glass eels to get up and over the dam and into the freshwater habitats they are seeking. In April of 2019, the eelway proved successful and thousands of glass eels were observed using the passage device.
This successful and low cost approach has opened up almost 7 miles of habitat that had been blocked for decades. Its projects like these that will hopefully rebuild the eel population over time.

A large number of eels below the dam indicates this was an important place to build an eelway. Low cost drainage piping with a small but constant flow of freshwater makes an effective eel passage device. The gravel and brick help guide the eels into the mouth of the eelway, and also help to break up the velocity of the water, providing lots of resting and hiding places for tiny glass eels.